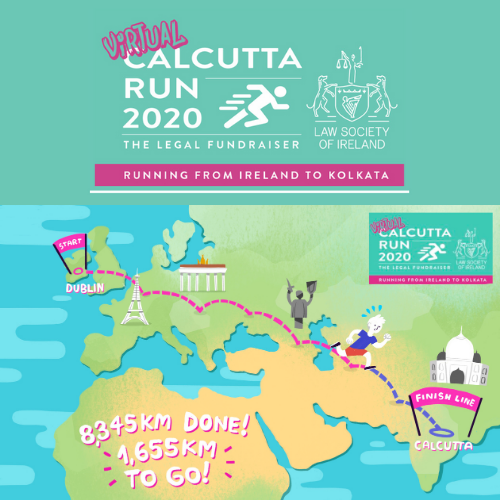 Entering its 22nd year, the Calcutta Run 2020 had great hopes to smash all previous records, however due to Covid-19 it had to go virtual for the first time ever!

The event which took place between October 30th – November 8th, asked participants to run, walk, cycle or hike the equivalent distance between Dublin and Kalkota in a combined effort (10,000km!) and raise money via iDonate.

All funds raised in aid of the The Peter McVerry Trust and The Hope Foundation.

Last year, over 1,500 participants took part and attended the event in Dublin. A record €300,000 was raised for the chosen charities, this year the organisers hoped they would raise close to €150,000.

At the end of the event organisers were delighted to confirm that they had raised an amazing €280,499.05, that is almost twice the amount the aimed for.

Big congratulations to all the participants, The Law Society and those behind the scenes making it all happen. A special thanks to Hilary Kavanagh who once again organised a fantastic event.

All Rights Reserved © 2023 The Panel
Company Reg. No. 365380
We use cookies on our website to give you the most relevant experience by remembering your preferences and repeat visits. By clicking “Accept”, you consent to the use of ALL the cookies.
Cookie settingsACCEPT
Manage consent

This website uses cookies to improve your experience while you navigate through the website. Out of these, the cookies that are categorized as necessary are stored on your browser as they are essential for the working of basic functionalities of the website. We also use third-party cookies that help us analyze and understand how you use this website. These cookies will be stored in your browser only with your consent. You also have the option to opt-out of these cookies. But opting out of some of these cookies may affect your browsing experience.
Necessary Always Enabled
Necessary cookies are absolutely essential for the website to function properly. This category only includes cookies that ensures basic functionalities and security features of the website. These cookies do not store any personal information.
Non-necessary
Any cookies that may not be particularly necessary for the website to function and is used specifically to collect user personal data via analytics, ads, other embedded contents are termed as non-necessary cookies. It is mandatory to procure user consent prior to running these cookies on your website.
SAVE & ACCEPT